Editing a zap while it's running - what happens 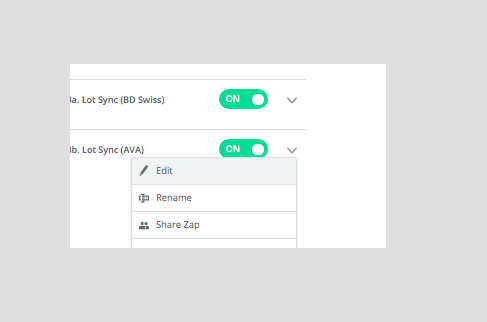 Try to edit a zap while its live - especially if it's on a delay step - and things can go wrong. Here's how Zapier handles it.

If you decide to edit your zap while it's live, you need to be careful. The first thing to note is, as soon as you make a change, the zap will switch itself off. That means, until you switch it on, it won't trigger again. So remember to switch it back on when you've finished making changes.

Also keep in mind - when you switch off a zap any currently running tasks will stop.

If you want to replay them, you'll be able to do that from within the history tab. However if you've made significant changes to the zap - adding steps, removing them, or changing the app or action type associated with a step - then Zapier won't let you replay.

When you replay a zap it will start again from whatever step it stopped on.

What if a zap is on a delay step when I switch it off?

This depends what type of delay step it is.

When a zap is switched off that contains a 'Delay for' or 'Delay after queue' step, in the History tab, it will look like there has been an error if you turn the Zap off in the middle of the delay. If you've not made significant changes to the zap, you'll be able to replay it from the delay step when the zap is switched on again.

For this reason, it's best to avoid very long delay steps in your zap and instead break the zap into multiple ones, using webhooks or other methods to chain them together.

Satisfied and loyal customers are the best marketing tools you can have for your business.
read-more
Luhhu Labs
June 29, 2021

How to save money by automating your processes

How much time can automation save your business?

Automation is the latest buzzword to hit the business community - and although it seems initially complicated - once implemented, it runs quietly in the background, drastically increasing efficiency by saving you hours each week.
read-more
Zapier
May 20, 2021

In this article, we will explore how Zapier's webhooks work and provide an introduction to some best practices for using them.
read-more