How Zapier has transformed the no-code movement 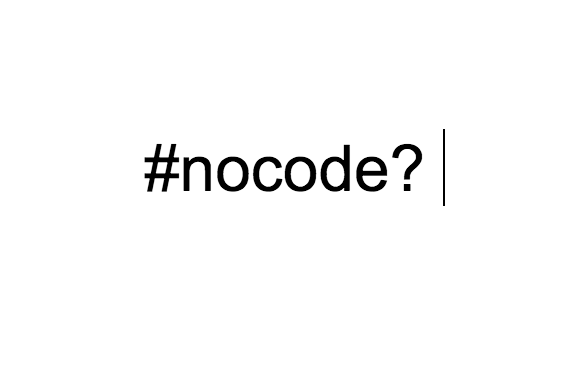 The modern world runs on code. Whether you are watching Netflix, ordering an Uber, or sending a quick email, somebody wrote highly complicated code to make that happen.

The thing is, only 0.26% of people can actually write code. And with code being critical to building a modern business, this could be a big problem.

Imagine if only 0.26% of the world knew how to write. Think about how many ideas, inventions, and stories would have been lost forever.

Fortunately, it’s increasingly possible to create digital products without code. Known as the ‘no-code movement’, tools like Zapier are empowering everyday people to build business, products, and projects without a single line.

Instead of writing in the language of machines, we can tell the computer what to do by bolting together simple visual blocks.

Some say this is the future of software development. Some are a little more skeptical.

We'll show you both sides of the argument and let you decide.

What does no-code mean?

No-code refers to the process of creating applications, websites, or workflows without code, often with a simple drag-and-drop user interface.

No-code can refer to complete solutions, such as:

It can also refer to connecting several different building blocks to create a novel product or useful utility.

This is where Zapier has changed everything.

How Zapier transformed the no-code movement

Zapier is one of the most famous tools in the no-code movement — and it's easy to see why.

To understand what Zapier is, you need to know what an API is.

An API (application program interface) is something that a software provider (like MailChimp, Shopify or PayPal) offers so that developers can connect to it and do things automatically.

For example, a developer could write code that watches for new Shopify customers and adds them to MailChimp.

With Zapier, you get the power of these APIs without needing to know how to code.

Instead, you get a simple list of 'triggers' and 'actions'. Rather than coding, you simply select the services you want to connect and what rules should apply.

Some examples of companies using Zapier are:

Before Zapier, nobody had abstracted these complicated APIs into simple visual blocks. Once Zapier launched, no-code platforms quickly followed.

Advantages and disadvantages of no-code

The most important advantage of no-code development is that it democratizes software development.

Rather than hiring expensive developers or spending months learning how to code, anyone can launch an eCommerce website, build an app or make an existing workflow more efficient.

This significantly reduces the barrier to entry for founders and entrepreneurs.

But that’s just one way that no-code benefits businesses:

What does no-code mean for the future of the web?

No-code makes launching things on the web accessible. With the whole world able to contribute, not just 0.26% who can code, we're going to see some big changes.

Does no-code mean no more programming?

Before no-code, businesses both big and small had to ask developers to solve their problems, for which they charge highly.

Thanks to no-code, all sorts of problems can be resolved without needing a highly trained developer. For example:

Without all this work, what will developers do?  Well, as brilliantly flexible as no-code platforms are, traditional coding will always be required.

Firstly, no-code platforms are not limitless. If you need something beyond the limits of no-code, you'll need to work with a software developer.

Secondly, no-code platforms are built with traditional code. The code has been abstracted, so you can't see or interact with it directly, but it's what makes the no-code platform so powerful.

So developers need not despair. Sure, no-code will help democratize software development, enabling non-coders to create applications and websites cheaply and quickly. But maybe this means trained developers will be freed up to work on less mundane, more challenging problems?

How will no-code affect building apps?

By abstracting complicated code into an easy to use visual editor, anyone can build apps. But should they?

Startups gain increased agility and reduced costs from choosing no-code. By getting the product to customers quicker, the next generation of no-code startups will launch and learn much quicker.

Yet, by choosing no-code, startups also need to live with the drawbacks. Unless their product or workflow is very simple, no-code will limit how the app functions and looks.

Building an app with no-code is a lot like building with LEGO. You can build a house, plane, car or a rocketship from the same pieces — the only limit is the flexibility of the imagination.

But what you create will always look like LEGO.

This might mean your app feels clunky or limited. Or your full-code competitor might be able to introduce features you just don't have the right pieces to build.

And with a third of people ready to ditch an app they don’t find immediately useful or enjoyable, that’s a big risk to take.

How will existing businesses use no code?

No-code will be revolutionary in automating simple and well-defined processes in existing companies.

With a simple drag-and-drop, you can automate tasks that would have previously required manual processes or bespoke software development.

For example, with Zapier you can automate marketing workflows, assign leads among your sales team and connect thousands of different apps to match your business requirements.

No-code: no good, or no problem?

As it stands today, no-code is empowering a lot of people to explore their opportunities. Whether that’s a good thing or not really comes down to personal opinion.

But one thing is for sure: if you’re considering writing code for a project, you should stop and think whether no-code could save you time and money.

Zapier is a great place to begin experimenting with no-code. As you start using Zapier, you'll learn how to quickly create automations that would have previously required a programmer — and what a feeling that is!

Then, when you get more ambitious, we're here to show you the way. Just tell us what you need from Zapier, and we’ll let you know how we can help.