What is Zapier flood protection? 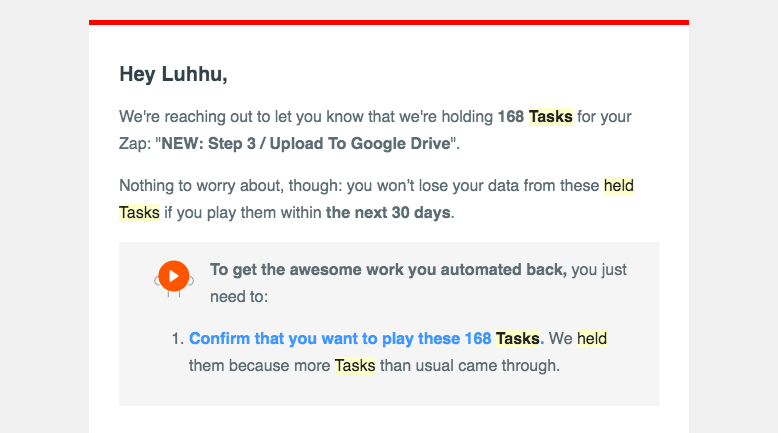 Understanding how Zapier applies limits to the number of times a zap can trigger at once.

Zapier's polling triggers work by connecting to whatever app you want your zap to trigger on - say Pipedrive - and looking for new instances of items - say a new Pipedrive deal. If five new deals are found for example, then the zap will run five times.

This works well, but say you were importing deals from another Pipedrive account and added 200 new deals at once. Perhaps you don't want the zap to run on those deals, but you forgot to switch the zap off. What's going to happen in this case? Luckily nothing. Let us explain.

If a zap encounters more than 100 new items to trigger on, Zapier flood protection kicks in and those tasks are are held until you manually confirm you want them to run. You'll know this has happened because you'll receive an email from Zapier and your History tab will show these talks as "Held - Throttled".

You'll then have the choice to either run these tasks - in which case they will play one per second - or delete them if they were indeed triggered by mistake. Tasks still held after 30 days are deleted.

Now, if you're in a situation where 100 new items every time your zap runs is not unusual, it is possible to increase the rate limiting threshold. To do that you'll need to contact Zapier support. While these doesn't seem to be any established upper limit, from our experience, limits above 2,000 will raise eyebrows.

Want to read more about rate limits and throttling? You can do so here.

Need an automation expert?
Tell us what you need and we'll get to work.
Hire Us
Need a little DIY help?
Get it now >
Filter by Category
Zapier
Integromat
Luhhu Labs

How to find the best name for your business in 2022

Irrespective of your industry, getting the perfect brand name would do more than boost the survival of your business because that’s not the only thing it’s capable of.
read-more
Luhhu Labs
November 3, 2021

Setup n8n for free on Heroku

This article will cover the steps to deploy n8n (Nodemation) automation software for free on a Heroku environment.
read-more
Luhhu Labs
September 1, 2021

Looking for someone's email address? It can be a tricky task! We explore some things you can try in your search.
read-more
Luhhu Labs
July 22, 2021

How exactly can marketing automation help your business post-COVID?
read-more