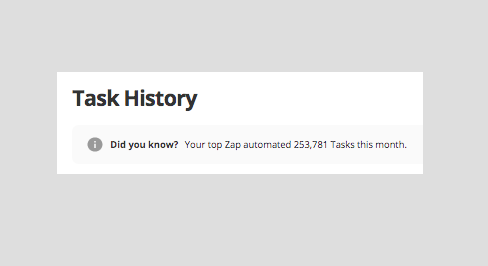 One of the trickier things about Zapier can be working out how much you're going to need to spend to make your zaps work. Zapier has a variety of pricing plans each with a variety of limits. The two important ones are the number of zaps you can have and the number of task you can use per month.

How much does Zapier cost?

Zapier has a Free plan, a Starter plan, a Professional plan, a Team plan and a Company plan. Each plan has a starting price and then tiered pricing based on how many tasks you need.

These prices are per month, billed annually. Paying yearly for Zapier costs less than paying monthly.

What counts as a task in Zapier?

Keeping it simple, each zap in your account that is switched on counts against your zap quota. If you leave a zap switched off, it doesn't count. This means you don't have to worry about things while you're still building and experimenting.

As for tasks, it's a little more complex. When a zap runs live, each successfully completed step counts as 1 task. The exceptions here is the trigger step which does not count towards you task quota. Nor does a filter step if it does not pass.

Let's look at an example to illustrate.

You have a zap that triggers on a new Shopify order, a filter step to check if the order total is above a certain amount and then an action step that writes the order details to a new row on a Google Sheet. That zap has two steps, excluding the trigger.

If the zap runs, the order total is above the set amount and the details are written to a Google Sheet - then you'll have used two tasks.

If the zap runs but the order total is below the set amount, then the filter will stop the zap. In this case, the zap will not have used any tasks.

With that in mind you can easily calculate how many tasks you might need per month. Say you'll get roughly 50 orders per month above the set total. That works out to 50 * 2 task. You'll be using about 100 tasks per month - so the Starter plan will be more than enough for you.

What is an example of a Zapier task?

Here are some examples of tasks in Zapier:

Is Zapier more expensive than Integromat?

Broadly speaking, Integromat is cheaper on a per task basis. However there are thing to consider - like the fact that they charge for the trigger step in a workflow. They also have plan restrictions based on data transfer that Zapier doesn't have.

Want to know more? We created this explainer video for you:

Need an automation expert?
Tell us what you need and we'll get to work.
Hire Us
Need a little DIY help?
Get it now >
Filter by Category
Zapier
Integromat
Luhhu Labs

How to find the best name for your business in 2022

Irrespective of your industry, getting the perfect brand name would do more than boost the survival of your business because that’s not the only thing it’s capable of.
read-more
Luhhu Labs
November 3, 2021

Setup n8n for free on Heroku

This article will cover the steps to deploy n8n (Nodemation) automation software for free on a Heroku environment.
read-more
Luhhu Labs
September 1, 2021

Looking for someone's email address? It can be a tricky task! We explore some things you can try in your search.
read-more
Luhhu Labs
July 22, 2021

How exactly can marketing automation help your business post-COVID?
read-more